INTERNATIONAL SERIES
at the Granada Theatre


CAMA’s 2022/2023 International Series at the Granada Theatre offers a musical time capsule featuring five great orchestras with histories that extend back more than a century. Anchored by two of America’s greatest orchestras—the Chicago Symphony Orchestra (founded 1891) with legendary Maestro Riccardo Muti conducting in his final season as CSO Music Director; and the Los Angeles Philharmonic (CAMA’s century+ concert partner founded 1919) with beloved Music Director Gustavo Dudamel performing two LA Phil-commissioned World Premieres—the season opens in October with the historic City of Birmingham Symphony Orchestra (founded in England in 1920 by Sir Edward Elgar) under the baton of the dazzling Mirga Gražinytė‑Tyla joined by the remarkable young British cellist Sheku Kanneh‑Mason whose televised 2018 performance at the Royal Wedding of Prince Harry and Meghan Markle was watched by nearly two billion people worldwide. Rounding out the orchestral season will be one of central Europe’s top orchestras, the Filharmonie Brno (of the Czech Republic) with roots going back to the 1870s and the great Czech composer Leos Janáček, under the baton of the acclaimed American conductor Dennis Russell Davies in an all‑Czech program. Then CAMA will reset the musical time capsule to the future with a special concert with the Curtis Symphony Orchestra, featuring 100+ extraordinary aspiring young master musicians from Philadelphia’s Curtis Institute of Music (founded 1920) under the direction of the esteemed conductor Osmo Vänskä, (Music Director of the Minnesota Orchestra), and joined by legendary piano master Yefim Bronfman, showcasing the sparkling virtuosity and masterful artistry of these exceptional young talents of tomorrow. Join CAMA for our upcoming 104th Season in a musical celebration of the Past, Present, and Future! • 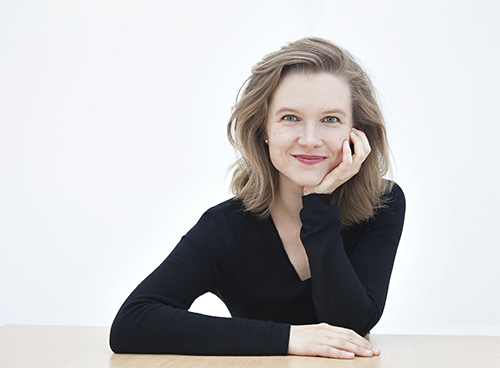 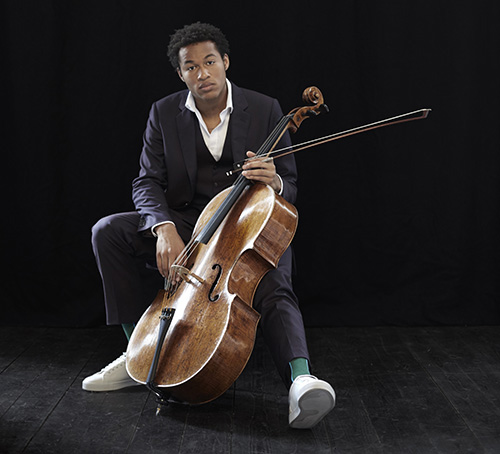 The City of Birmingham Symphony Orchestra is the flagship of musical life in Birmingham—and one of the world’s great orchestras. The tradition began with their very first concert back in 1920—conducted by Sir Edward Elgar. The CBSO became internationally famous when conductor Simon Rattle took the helm in 1980. In 2016, the CBSO welcomed the appointment of Mirga Gražinytė-Tyla, a native of Vilnius, Lithuania, as its Music Director and now Principal Guest Conductor, following her time with the Los Angeles Philharmonic as a Dudamel Fellow, Assistant Conductor, and Associate Conductor. British cellist Sheku Kanneh-Mason became a household name in 2018 after performing at the wedding of Prince Harry and Meghan Markle at Windsor Castle, watched by nearly two billion people globally. Sheku’s album Elgar on the Decca Classical label made him the first cellist in history to reach the UK Top 10. 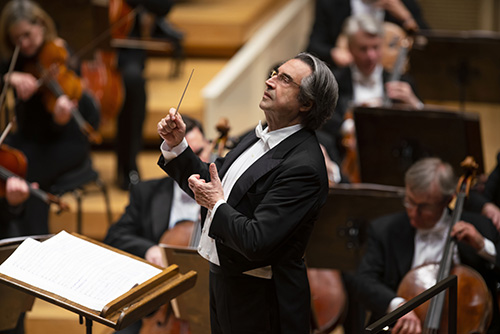 “The world needs harmony.
Music helps us to understand each other’s point of view.”
— Riccardo Muti

Consistently hailed as one of the leading orchestras in the world, the legacy of the Chicago Symphony Orchestra and Music Director Riccardo Muti marks an extraordinary chapter in the CSO’s 132‑year history. One of the world’s preeminent conductors, Maestro Muti’s tenure with the CSO concludes in 2023, marking the thirteenth and final year of an exceptional musical partnership that has thrilled audiences in Chicago and around the world. The CSO’s talented musicians are the driving force behind the ensemble’s famous sound heard on best‑selling recordings and annually at more than 150 concerts at Symphony Center in Chicago, summers at Ravinia, and tours in the United States and abroad. Listeners around the world can hear the CSO in weekly airings of the CSO Radio Broadcast Series. 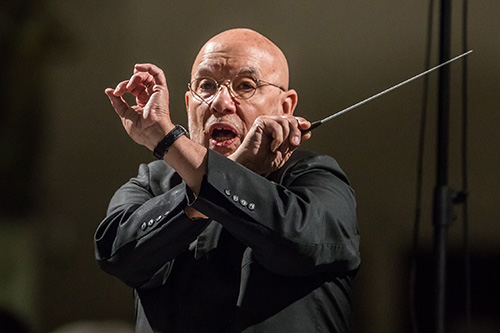 Filharmonie Brno
(of the Czech Republic)

For more than a half century, renowned American conductor Dennis Russell Davies has conducted many of the world’s finest orchestras and opera companies and is widely considered one of the most innovative and adventurous conductors in the classical music world. In 2018, Maestro Davies became the Artistic Director & Chief Conductor of the Filharmonie Brno, an orchestra with roots that go back to the 1870s, when then-young composer Leoš Janáček endeavored to establish a Czech symphony orchestra in Brno (the traditional capital of Moravia), now the second largest city in the Czech Republic after Prague. The present orchestra was created in 1956 and has been among the leading Czech orchestras in both size and importance, where the programing of works by Janáček has always been at the core of the orchestra’s repertory. Appropriately, Maestro Davies’s stimulating CAMA concert will feature an outstanding All‑Czech Program of works by three of the greatest Czech composers: Janáček, Dvořák, and Martinů. Maki Namekawa is a leading figure among today’s pianists, bringing to audiences’ attention contemporary music by international composers. In 2019 Philip Glass composed his first Piano Sonata especially for Maki Namekawa, which she premiered that year at Piano‑Festival Ruhr. 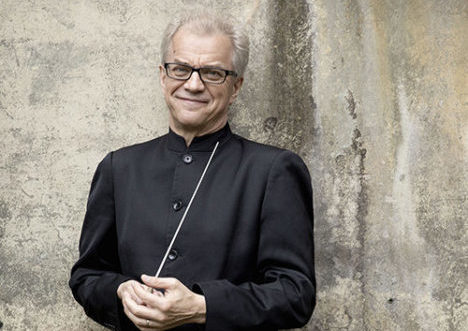 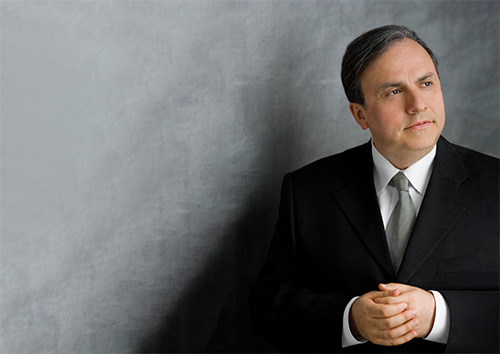 This performance is part of CURTIS ON TOUR, the Nina von Maltzahn Global Touring Initiative of the Curtis Institute of Music.

Founded in 1920, Philadelphia’s Curtis Institute of Music is one of the top music schools nationally and internationally. Names such as Samuel Barber, Leonard Bernstein, Peter Serkin, Yefim Bronfman, Lang Lang, and Yuja Wang are amongst the dozens of notable Curtis alumni. Maestro Leopold Stokowski predicted that Curtis would “become the most important musical institution of our country, perhaps of the world.” Each year the 100+ extraordinary aspiring young musicians of the Curtis Symphony Orchestra work closely with internationally renowned conductors and Curtis’s celebrated faculty, then go out and play concerts in the United States and around the globe that the Washington Post has hailed as “exhilarating from beginning to end.” This unique professional training has enabled Curtis alumni to assume prominent positions in many of America’s and the world’s leading orchestras. Under the direction of the esteemed conductor Osmo Vänskä, (Music Director of the Minnesota Orchestra) and joined by legendary pianist Yefim Bronfman, the upcoming CAMA concert will showcase the sparkling virtuosity and artistry of tomorrow’s exceptional classical music talents. 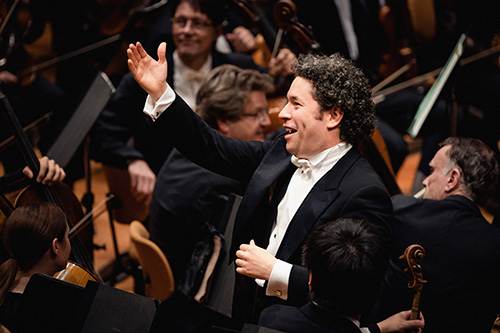 Gustavo Dudamel is driven by the belief that music has the power to transform lives, to inspire, and to change the world. Through his dynamic presence on the podium and his tireless advocacy for arts education, Dudamel has introduced classical music to new audiences around the globe and has helped to provide access to the arts for countless people in underserved communities. As the Music & Artistic Director of the Los Angeles Philharmonic, Dudamel’s bold programming and expansive vision led The New York Times to herald the LA Phil as “the most important orchestra in America—period.” The orchestra’s May 28 concert will feature two LA Phil‑commissioned World Premieres of works by noted American composers Ellen Reid and Gabriella Smith, with cellist Gabriel Cabezas as soloist in Smith’s Lost Coast, inspired by her reflections on climate change.