MASTERSERIES at The Lobero Theatre
2016-2017 Season

The 2016-2017 Season of CAMA’s Masterseries at The Lobero Theatre dives into the deepest waters of artistic excellence and meaningful programming. Pianist Jonathan Biss and the Brentano Quartet offer a program of late Beethoven. Violinist Augustin Hadelich and pianist Joyce Yang team up for a virtuosic program of works new and old. Tafelmusik Baroque Orchestra returns with its latest multimedia marvel, J.S. Bach: The Circle of Creation. And mezzo-soprano Susan Graham appears with a fascinating evening of music from Schumann’s Frauenliebe und -leben, interwoven with works inspired by or relating to the song cycle by fifteen composers in seven languages. 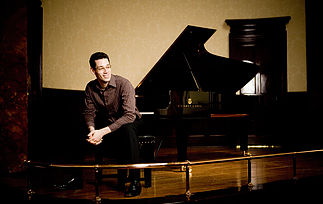 Pianist Jonathan Biss teams up with the Brentano Quartet for THE LATE STYLE, an unforgettable evening of some of Beethoven’s most profound and searching masterpieces, including the final piano sonata and final string quartet. Quartet-in-Residence at Princeton University for fifteen years, the Brentano Quartet is now Quartet-in-Residence at Yale School of Music since 2014. Jonathan Biss is world-renowned for his deep musical and intellectual curiosity, performing a diverse repertoire in concert and in recording. In 2016 he releases the fifth volume of his nine-year, nine-disc recording cycle of Beethoven’s complete piano sonatas.

Tafelmusik Baroque Orchestra presents J.S. Bach: The Circle of Creation – a celebration of the genius of Bach and the latest multi-media creation by Alison Mackay, the creator of phenomenally successful Tafelmusik productions seen around the world including The Galileo Project and House of Dreams. J.S. Bach: The Circle of Creation combines text, music, and stunning projected video and images to explore the world of the artisans – papermakers, violin carvers, string spinners, and performers — who helped J.S. Bach realize his musical genius. This all-Bach program is performed by Tafelmusik musicians entirely from memory.

Grammy® Award-winning Susan Graham has been honored as Musical America’s Vocalist of the Year (2004). As one of today’s foremost interpreters of French vocal music, the Texas native was awarded the French government’s “Chavalier de la Legion d’Honneur.” In an exceptionally fascinating program of songs in seven languages, Graham takes Schumann’s song cycle “Frauenliebe und -leben (A Woman’s Love and Life)” as point of departure in a deep-diving journey into an ocean of two centuries’ span of art songs that develop the themes touched on in the composer’s lyrical monument.